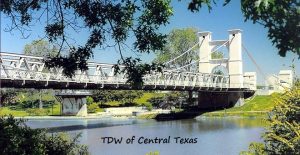 Welcome to the Central Texas Chapter of Texas Democratic Women.

The purpose of Texas Democratic Women (TDW) is to increase the participation and influence of Democratic women in Texas government and politics.

Texas Democratic Women (TDW) was organized in 1987 to elect more women to all levels of office and to assist in the growth of the Democratic party in Texas. TDW has worked closely with such groups as the Texas Women’s Political Caucus and the League of Women Voters of Texas and in 1992 participated with these and other organizations in a statewide voter registration project.

TDW is an affiliate member of the National Federation of Democratic Women (NFDW), an organization formed in 1971. TDW’s and NFDW’s goals are aligned: to encourage women to get involved in all aspects of the political process and to run for elected office.

In 1992 TDW was selected to host in Austin the 1993 convention of the National Federation of Democratic Women. In 1992 the president of TDW was Mae J. Jackson of Waco, the first African American woman ever elected as Mayor of Waco. Currently, one of the annual TDW awards is the “Mae Jackson” award.

We invite you to join us in our mission is to inform and educate women and others on the issues we face in today's challenging world.  We hope to inspire everyone to make their voices heard, become involved in the political process and support our goal of electing more Democratic women at all levels of government.

Our meetings are held monthly on the second Saturday of the month at 11:00 am (locations may vary).  We invite you to come to a meeting and make some new friends who share a progressive point of view and embrace diversity in all its forms.

We meet on the 2nd Saturday of each month

We will be attending the 2022 Richards-Jackson Dinner

6pm at the Anthem Stories Building

Check back here and on our Facebook  page at

for location and other info